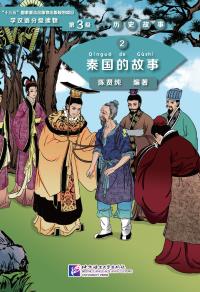 The series Graded Readers for Chinese Language Learners is composed of 50 books, divided into three subseries, namely folktales, literary stories and historical stories, corresponding to Levels 1-3 respectively. The rich and fun content and easy-to-understand language makes it easy for everyone, whether they are foreigners learning Chinese, children with parents of Chinese origin, ethnic minority students of the Chinese language, or even primary school students in China, to read this series. It enables the readers to gradually improve their Chinese reading skills and enhance their understanding of Chinese culture by reading and enjoying stories.

The subseries “Historical Stories” is composed of 20 books based on the history of the Spring and Autumn period and the Warring States period between 770 BC and 202 BC. On the basis of the historical records in Commentary of Zuo, Records of the Grand Historian, Discourses of the States, and Strategies of the Warring States, each book is given a number according to the chronological order, and readers can read the books in order.

The Story of Kingdom Qin tells the story of Kingdom Qin in the Spring and Autumn period—from its founding and the turmoil it experienced to its conquering the six states in the east.
Ms. Chen Xianchun is a professor at Beijing Language and Culture University who has engaged in the teaching of Chinese as a foreign language since 1975, equipped with rich Chinese teaching experience. Professor Chen has made profound research into the teaching of Chinese reading and has published, in addition to more than 20 academic papers, many monographs and textbooks such as Teaching Reading and Psychology, Typical Characters and Events in Chinese Culture, A Primer on Modern Chinese Reading, An Intensive Chinese Course, and Read This Way.
As an extracurricular reading material or an in-class extensive reading material